The CATSA Plus Checkpoint is soon going to be unveiled at a variety of Canadian airports as an additional security line. The new system will be placed at airports located in both Calgary and Montreal by the end of this year. The system uses electronic gates and ceiling-mounted sensors. The new addition is supposed to help increase the wait-times that passengers are experiencing with average travel these days. Even those who arrive to the airports hours early have been finding that they miss their flights because of the security nightmare that ensues. For those traveling in the US, the increasing wait times have also prompted airports themselves to directly call-out the TSA for their lack of efficiency. 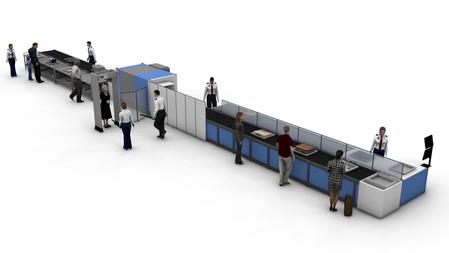 Montreal is expected to set-up the system by late August with just one line, and they are also looking to use various elements of the CATSA Plus checkpoint to help scan carry-on bags directly. The system will also be able to use lines that automate the distribution of bins for carry-on bags and this is supposed to help decrease screening bottlenecks. The system includes e-gates and tracking sensors, remote x-ray image review, and more. A system of tracking sensors in the ceiling will also anonymously track passenger movements within the queue and within the checkpoint.

RFID tags are attached to each bin and the bins are then tracked through the automated system. Ideally, those that are cleared for travel will be more efficiently separated from those that require a more thorough search. Apparently where they have been tried already, these systems have been able to improve the flow of passengers by at least 30 per cent. According to CATSA's 2015 annual report, they screened roughly 59 million passengers in 2014-2015 and claims that it screens at least 88 percent of its passengers within 15 minutes or less. The Canadian Air Transport Security Authority (CATSA) has 2016-2017 operating budget of roughly $618 million. And like the TSA, they are a Crown corporation that was established after the Sept 11th attacks.

Just a few months ago, a panel that was recently appointed by the federal government for review of the country's transportation system, made a recommendation that the country's largest airports should be privatized. They also said that passenger screening was in need of dramatic overhaul. The report by the panel found that Canadians pay the highest aviation security fees in the world for a service that cannot keep up with increasing air-passenger traffic. Various airports have collectively asserted that their biggest problem with travelers is the unpredictability of air-passenger screening.